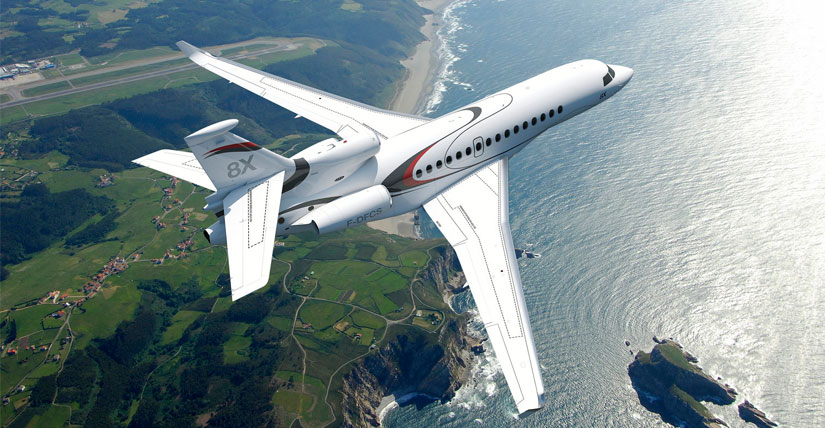 The term to hold on to here is “ultralong range” and when your speed is being clocked by the machunit, there is a sense by which you know that life will never be the same again. That is especially so when you consider what Dassault’s flagship, the falcon 8X jet is bringing to business aviation.

When in the skies, the longer and faster you can fly is the definition of the elite in Business Aviation. The Falcon 8X is not only 20 per cent shy of hitting the speed of sound, it is also made by military fighter jet manufacturer, Dassault Aviation. Its features are right up there with the best in the biz and should not be taken nonchalantly. Why?

Firstly, we are discussing a machine engineered by Dassault Aviation, who happen to know the skies and what it takes to stay up by a long way. They manufacture fully operational military wings for a living and to further present a backdrop to you, they already have a fleet of renowned Falcon jets that have paved the way in Business Aviation. So, we need to pay some serious attention in whatever currency we have towards the Falcon 8X, because Dassault is calling it their best yet.

To begin with, the French Falcon 8X is a stretched version of its renowned sibling, the Falcon 7X. It will not only feature the largest cabin or the longest range of the trijet Falcon family, but according to Dassault, it redefines the current nomenclature of what the Ultra Long Range class.

This objective of course is in terms of what business jets offer as a whole- cabin experience, performance and safety margins. But that’s just being simple and dry about it. The Falcon 8X is that far from being that boring. 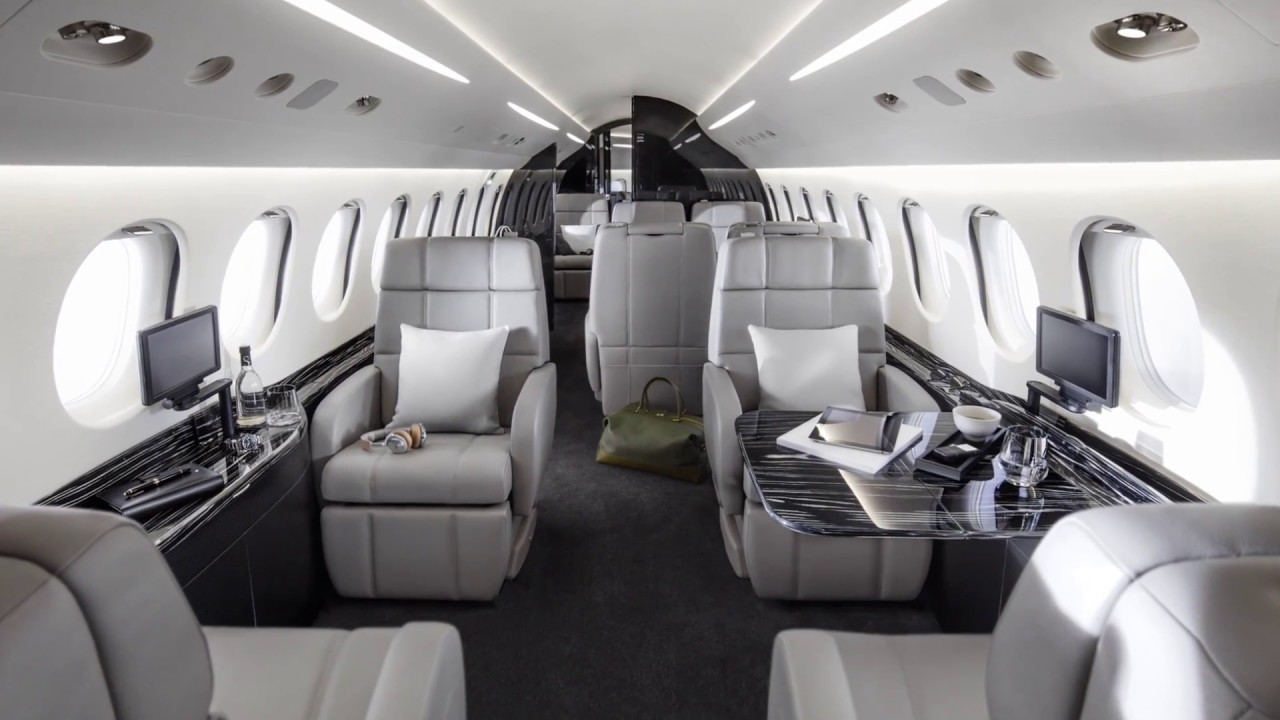 The cabin of the 8X is using a similar fuselage to the 7X but with two additional barrel plugs, one ahead and one aft of the wing root. This grants it the longest cabin to be seen on the entire Falcon fleet thus far at 42 feet and 8 inches long. Such size has warranted passengers the spoils of 16 windows on either side which is quite a sight really.

The Falcon houses the highest level of customization of any aicraft on the market. There is more than 30 unique configurations that includes 3 galley sizes and passenger seating areas complete with varying lengths capable of supporting different lavatory layouts. This is together with a lavatory with an optional dedicated shower.

The typical configuration will see the upfront portion of the cabin come with a 4-chair club configuration while the mid-section is designed with a 4-chair conference grouping format with adjacent credenza. Of course, the rest area is characterized in the aft-cabin with pullouts and an executive workstation which can be replaced by a second pullout divan for the overnighters.

All these amenities however hang on one crucial thing that makes or breaks a flight-fatigue factors. Unsurprisingly, Dassault engineers have gone to the minute details to sort out noise and cabin altitutde.

The Falcon 8X features a lighter and more effective acoustical insulation package that isolates noise absorbing by placing materials at specific areas where noise volumes are loudest. The result is in 2 to 3 dB reduction in overall cabin noise with a 25 per cent weight savings. This provides a record noise level of 49 dB (SIL). It is a record because a typical home noise environment is estimated to be in the 50 to 55 dB (SIL) range. Similar to the Falcon 7X, the Falcon 8X pressurization system keeps the cabin altitude as low as 3,900 ft while the aircraft is flying at its typical 41,000 ft altitude. Such cabin altitude is 2,000 to 4,000 ft lower to the cabin altitude of most aircrafts on the market. Comfort indeed!

The stylish Falcon 8X will be given its thrusting by virtue of three PW307D engines granting it a 5 per cent increase compared to the 7X that uses the PW307A’s. All of the 6,772lb of thrust on each engine grants it a significant reduction in fuel consumption, noise footprint and NOx emissions.

The Falcon 8X will also be fitted with a redesigned ultra-efficient wing derived from that on the Falcon 7X. The wing structure has been optimized, reducing overall aircraft drag during cruise and affording a 600lb weight saving. Together with a new leading edge profile and reengineered winglets, these improvements are expected to significantly improve the aircraft’s lift-to-drag ratio

What this implies in essence is that the combination of wing design improvements and the upgraded powerplant from the Falcon 7X grants the bigger 8X up to 35 per cent more fuel efficiency than any other jet in the ultra-long range segment, which translates in saving operational costs.

As with the 7X, the Falcon 8X still retains its mastery at very low speeds which allows it to clear some of the more challenging airports in the world such as London City Airport and Lugano Airport in Switzerland. The aforementioned airports are notoriously famed for giving other large cabin aircrafts a real difficult task on the runway. But the Falcon 8X is capable of approaches up to 6 degrees, twice the standard approach angle of 3 degrees. With an typical approach speed of 106 knots (197 km/hr) at typical landing weight, the Falcon 8X will be able to land on runways as short as 2,150 feet (655 meters).

With its 6,450 Nm/11,945 km range, the Falcon 8X will be able to perform an extensive list of one-leg missions, including Beijing to New York, Hong Kong to Seattle, Paris to Singapore and Sao Paulo to Moscow.

Numerous redundancies have been implemented to assure that all critical systems remain operational in the event of multiple failures on board the Falcon 8X.

The most visible one is the 3 engine configuration, which is unique to Dassault Aviation. Inherited from the Falcon 50 series and the Falcon 900 series, the Falcon 7X and 8X are the only Business Aviation aircrafts offering such a power redundancy.

It is unsurprising that as a fighter jet manufacturer, Dassault Aviation has gained and grown on extensive experience with Fly By Wire (FBW) technology over the last 30 years. The French manufacturer made this technology and know-how available on the Falcon 7X initially and now the Falcon 8X, with the implementation of digital flight control system.

The Falcon 8X will feature a new generation of Dassault’s award-winning EASy flight deck equipped with a heads-up display (HUD) that combines both synthetic and enhanced vision. It will also offer a dual HUD capability, considerably reducing pilot workload and increasing situational awareness, whatever the weather and the environment.

It is a numbers game in the end which is exactly why the Falcon 8X no longer becomes an option but a want that will feed necessity in the most spectacular way yet. The Falcon 8X stops just above superior comfort and hovers on luxury for as long as it needs to.

When you consider that it will be the only Falcon with the longest fly range, fully equipped and stocked by Dassault from tail to wing tip, the question that actually needs an answer to is not about the Falcon 8X at all.

It is about how we can take full control of time and spend it efficiently while travelling in the level of comfort we desire.

To that, the answer is the Dassault Falcon 8X.