Onboard The Maverick Airbus H130 !

Onboard The Maverick Airbus H130 ! 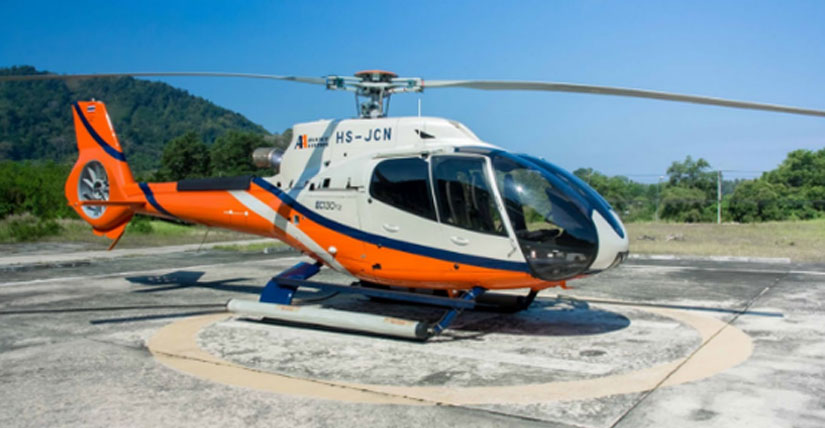 I’VE BEEN FINDING IT MORE OF A CHALLENGE TO FALL ASLEEP IN FOREIGN PLACES OF LATE. THIS COULD EITHER BE DOWN TO AGE CATCHING UP OR THAT THE EXPERIENCES KEEP GETTING LARGER AND BETTER, THAT SLEEP BECOMES OBSOLETE. IN THIS PARTICULAR INSTANCE, I WAS EXCITED AT THE PROSPECT OF MY FIRST HELICOPTER RIDE. BELIEVE ME, IT WAS AN EXPERIENCE I WILL NEVER FORGET.

Amidst some real effort of trying to sleep at the hotel, I was eventually up way ahead of time for a helicopter demo in Phuket, Thailand recently. By 6 am on that Saturday morning early in February, it was quite difficult to contain the excitement I had kept stored. After all, it was going to be my first ride on a heli. Think about it: as a child growing up, I’m sure you might relate to the memories of playing around with helicopter figurines and here I was about to board my first heli ride, on board an Airbus one at that.

While we were scheduled to meet at Advance Aviation at 9 am for our safety briefing, I was already present on the airstrip by 8 o’clock at the ready for this demo ride. Yes, the anticipation of it all was bordering overwhelming. Surely enough, an hour later the entire entourage arrived: Jean Bernard, Mr. Oh and Shirley of Airbus. After a quick but thorough safety briefing, we boarded this rugged yet stylish Airbus Helicopters H130 at Advance Aviation base.

Advance Aviation is situated south of Phuket International Airport. The establishment specializes in a number of aviation services and deliverables that cater for Phuket, Bangkok and Chiang Mai. It was only fated that they played prompt hosts to our planned excursion on the Airbus Helicopters H130.

The H130, as I was informed prior to our outing, is known to be a versatile carrier in its class. The technology behind it, or rather, in it, is the product of Airbus’ continuous push as a leader in the aviation sector. It falls into the category of light-single engine helicopters. But unlike the many helis in this range, the H130 is at the top-end of its class segment for that very same reason again: versatility.

Once we were of the ground from Advance Aviation, it was quite clear, that among the five souls on board, yours truly was the least-seasoned heli-rider. With Captain Nathawat Weerapakdee piloting us on the day, we set of on a route that would carry us from the west coast of Thailand upward to the eastern side, near Phang Nga Bay.

Captain Nathawat, or Captain Pops as he preferred to be called, was at full stretch as he casually showed of the H130 in its tourism guide.

As we began to see some trademark blue Thai waters, it quickly dawned on me how momentous the occasion was and for all the wait, I did not experience any kind of vertigo sensation as I expected. That being said, there was no cause for concern of any kind because the panoramic view from the H130 takes your mind of unnecessary worry. It was in this one moment where time seemed to stand still as I soaked in this marvelous bird’s eye view scenery that not many people get to see.

Prior to this demo fight, I was under the impression that heli rides would be more raw. The H130 however, was as nimble as it comes in terms of an experience. This is largely due to the fact that Airbus Helicopters as an aviation specialist, has perfected its rotor technology and cabin structures.

The versatile nature of the H130 is built atop a number of coherent elements that come together to gift a class-leading formula that has stapled Airbus as industry leaders. The formula in question involves the wellknown trademark Fenestron® shrouded tail rotor, a dual-channel FADEC (Full Automatic Digital Engine Control) unit with a third independent and automatic channel for engine control, and an automatic variable main rotor speed system to reduce external sound levels. This entire structure is supported still by a fully equipped VFR (Visual Flight Rules) day and night navigation system as part of a standard ready-to-fly package, as well as with VEMD ® (Vehicle Engine Monitoring Display) integrated instrument panel with a GPS map.

The H130 that five of us toured in seated us all in pure comfort with much space to spare still. Behind us (depending on its missions), the seating configurations can be further customized. Its high-tech comfort can be experienced to a capacity of eight souls in total, including one pilot. This is complete with forward-facing energy-absorbing seats and what’s more, a large sliding door and long boarding steps on either side of the heli allows an easy cabin access. There are also sufficient luggage compartments in the cabin for carry-ons.

As the quietest helicopter on the market in its category, the H130’s Fenestron® shrouded tail rotor and automatic variable rotor speed control contribute to its significantly reduced external sound level. With a noise signature 7 dB below requirements, it is quieter than the most restrictive limits defined by the Grand Canyon National Park in the United States – a recognized benchmark for eco-friendly tourism operations.

In addition, the H130 is laced with the latest state-of-the-art technologies, materials, systems and avionics that together, create a “theatre-style” platform that goes well with the panoramic view available from all angles inside the H130. The visibility granted by the H130 effortlessly showed us the vast scenery that we few past from Advance Aviation right up to Phang Nga Bay. We also caught long glimpses of the Muslim Floating Village, James Bond Island, Lagoon Island along with scores of limestone and mangrove-filled areas on our way back. All within 30-minutes of pleasure from the skies, which would otherwise amount to a car drive of 1 hour and 40 minutes (this does not include boat rides to the particular island stops we made).

This alone brought me to consider the endless possibilities the H130 grants its the high end 79 owners and users.

Because of its make and build, the H130 model currently fnds its uses across a wide variety of settings; business and private aviation, tourism operations, emergency medical services (EMS) missions, law enforcement and even aerial work missions. Renowned for getting into inaccessible locations, the H130 is more often than not, an excellent helicopter in its class for emergency medical services (EMS) missions. The wide, unobstructed cabin with large hinged and sliding doors enables easy loading and unloading of stretchers, and ensures a rapid access for medical personnel. The low internal sound level and the fat cabin foor ofer a suitable environment to install both sensitive and bulky medical equipment.

It has also had a fair bit of time in the entertainment industry as the H130 has been used in many major Hollywood blockbuster films as well. In this instance, it served its tourism applications well, because it makes things like island hopping a peaceful and hassle-free affair. The H130 served its tourism duties quite beyond my expectations, and this is purely down to the amazing view it allowed, location accessibility and silent cabin experience that made it more memorable.

Estate or plantation owners could be on their sites in no time. Similarly, if you’re late for a deal-clinching meeting up in Penang, this H130 might prove the maker or breaker in that deal. This also makes the H130 a top choice for business aviation.

Helicopters in general, provide an immediate solution across short distances and in the case of the H130, it covers a total of 606 km or 326 Nautical miles and thus, becomes a more efficient option when compared to private jets. Of course, what private jets lack in availability on-demand, are made up for with big amounts of luxury when needed. In contrast, helicopters might lack in comfort for what they make up in efficiency. Or at least, that’s what I thought, until I completed this demo ride on the H130 because if comfort is needed, it can be customized to meet those requirements at specified rates.

When I learnt a little later how Airbus Helicopters possesses the lion’s share of the helicopter market segment, it also hit me like a brick wall on the experience I was lucky to have. Decades worth of advancements have been finely crafted into bringing forth a helicopter that not only serves basic transportation functions, but also as a machine master-class that can meet almost any kind of demands be it business or private uses alike, while serving any other extreme missions that might require of it like emergency medical services ops, of which this helicopter is being widely deployed in.

While we hovered for a brief moment over the air strip before landing back to make way for on-coming fights to land it, I saw how the H130 comes of in the end as a multi-role helicopter that is pleasant despite being known for performance, ruggedness, reliability and safety. It is defnitely a maverick. True, diferent vehicles bring different effects: cars will always be about the driver, while yachts are about luxury cruising and jets are about endless possibilities. This H130 heli ride in my opinion was about one thing: freedom. And take it from one car buff to another, fying in it is one experience that is not easily forgotten for all the right reasons. And it is for all the right reasons that the H130 truly is a class leader by Airbus Helicopters.